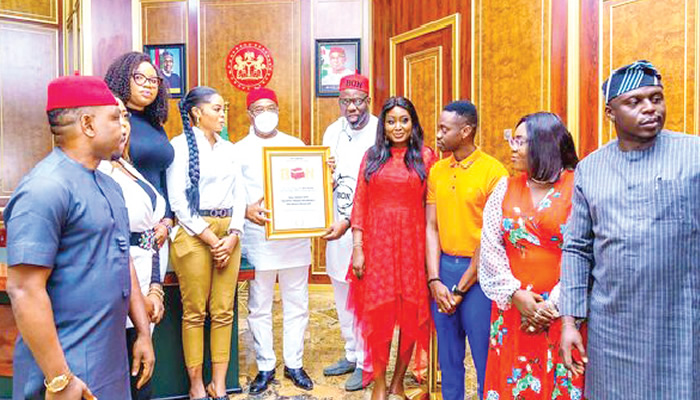 The 2022 edition of the Best of Nollywood Awards will hold today, December 3, 2022 in Owerri, the Imo State capital.

To honor the memory of gospel artiste Sammie Okposo who died last week, the organizers have announced that they have renamed the ‘Best Soundtrack in a Movie’ category in honor of the late ‘Wellu Wellu’ singer.

This also saw a cleaning brand, Hypo, join the train of sponsors for the awards, giving it the “Best Short Film” category. The brand will give the winner of the category some money to shoot a short film about hygiene.

The founder of the BON awards, Seun Oloketuyi, speaking about the latest developments, stated that the new innovations coming from the awards prove that this year’s edition will be bigger and better than the previous editions.

“Sammie Okposo was a force in his life who did a lot for the growth of gospel music in Nigeria and beyond. We are not a music award, but we feel the need to pay tribute in some way. This prompted us to rename the ‘Best Soundtrack’ category. His loss will be felt by everyone and this is just a way to immortalize him.”

Oloketuyi added that Hypo’s provision of the short film category was a big deal. He stated that winning an award and getting the money to do it again is a feeling that any producer would welcome.

The organizer of the awards also stated that the Governor of Imo State, Hope Uzodinma, has opened the door wide to the entertainment industry, especially the movie sector, to contribute to the financial growth of the state economy through tourism.

The hosts of this edition are the acting couple, Lateef Adedimeji and Queen Nwokoye.