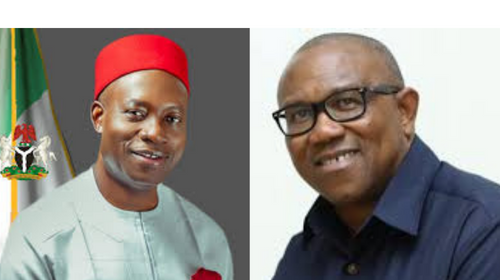 Soludo said the LP candidate was gambling with his election bid, adding that Obi had not put in place the necessary structures to win the Presidency on the Labor Party platform.

The governor stated in an article written on Monday, “History is Made and I Will Not Be Silent (Part 1).”

The former Central Bank of Nigeria’s criticism of his predecessor in Anambra State triggered a series of reactions from Obi’s supporters, especially on social media.

Obi governed Anambra State between 2006 and 2014 on the platform of the All Progressive Grand Alliance before defecting to the Peoples Democratic Party and later to the Labor Party.

Soludo alleged that some people, angered by his comments, attacked him and his family.

He said the comments made to the LP candidate in his community, Isuofia, Aguata Local Government Area of ​​the state, were suggestions made by the instigators.

While he described the attacks on him as a display of desperation, intolerance, he stated that the attempt to persecute anyone who expresses the slightest dissent was reprehensible.

Soludo referred to the attack on the Archbishop of the Anglican Church of Nigeria, Enugu Ecclesiastical Province, Dr. Emmanuel Chukwuma.

He described as tyranny the attempt to muscle in on those who were not in favor of Obi’s presidential ambition, stressing that the attitude could jeopardize the future political and economic interests of the Igbo if not checked.

Despite acknowledging the anger of some young people in the cities and the Diaspora over the course of the country or with the candidates of the main parties, the governor spoke to his opponents about the principles of democracy, stating that the minority will have a say, but the majority their way.

He believes that translating anger and social media agitation into political results requires a huge amount of work.

Weighing the chances of the standard LP in the next poll, the governor said: “Let’s be clear: Peter Obi knows he cannot and will not win. He knows the game he is playing, and so do we; and he knows that we know.

“The game he is playing is the main reason he did not come back to APGA. The brutal truth (and some will say, God forbid) is that there are two people/parties running for president: the rest is exciting drama!

“The fact that many Americans would not like Joe Biden (age 79) and Donald Trump (age 76) to be two front-runners for president in their parties does not take away from the fact that if they both appear as candidates, one of them will definitely be president in 2024.

“As my brother, I wish him well and also pray. I told him in his courtesy call that my prayer would win him or Professor Umeadi of APGA, why not?

“That’s from my heart, but I also told him that my mind and the events on the ground led me to know that the probability is close to zero (what I can’t say before you, I won’t say behind you).”

Saying that Obi may not come third in the race, Soludo said the LP lacked the structure to win the presidential election in 2023.

He added: “So I’ve already told him my opinion. As my brother, I wish him well and pray for him. In fact, there’s no credible path for him anywhere near the top two, and if he’s not careful, he won’t even come close to third. .

”Analysts tell him you don’t need “structure” to win. Fantasy! Of course, the LP won the governorship elections in Ekiti and Osun through social media and phantom polls, while getting barely 2,000 votes on the ground.”

The governor admitted that the LP candidate would garner some votes in his home state of Anambra, but noted that this would get him nowhere.

“Of course, Peter Obi will get some votes, and probably win in Anambra State, as a ‘homeboy’. But Anambra is not Nigeria. If he likes, I can even campaign for him, but that won’t change much. I had them from state to state including from the polls, it was on track to reach 25 percent in five states as of August this year. According to the latest polls, it has dropped to four states, and declining,” he said.

Dismissing claims that he was envious of his predecessor, Soludo said he and Obi had been friends for a long time, adding that he had vowed never to leave APGA for another party.

The governor added, “Peter Obi himself was one of those who told Ndigbo that APGA was the vehicle through which the Igbos would organize to involve the rest of Nigeria politically. He is said to have vowed to Ojukwuri and publicly to quit politics the day he left APGA. The rest is history. PDP in 2019 when he was a vice-presidential candidate, the emotional train called the ticket “the Igbo project.” I was then the chairman of the planning and strategy committee of Ohanaeze Ndigbo Worldwide, I cautioned that it was a more pragmatic approach, but the emotional glimmers of the time prevailed. We were vindicated later.

“By the way, in 2016, he visited me and suggested that I defect to the PDP and contest the 2017 election against the incumbent, Willie Obiano, but I refused. After my victory in November 2021, he called me to congratulate me as I did to him in 2010. That is the Anambra way: we fight hard in campaigns but share drinks at the next social events. After all, the great Zik of Africa said that in politics there are no permanent friends or permanent enemies, only permanent interests.’

The governor stated that the LP did not field candidates for the two houses of the National Assembly in Lagos, adding sarcastically that they would give Obi money if the presidential candidate of the All Progressives Congress, Bola Tinubu, won. easier

He noted: “Not even in Lagos State (the supposed home of urban youths) where the Labor Party could not find candidates to contest for the House of Representatives or the Senate.

“Polls also show that it takes away votes mostly from the PDP. In fact, if I were Asiwaju Tinubu, I would also give money to Peter Obi as someone who heads one of his campaign departments, because Obi is making Tinubu’s path to victory much easier by bringing him down indirectly.”

Soludo called on South East leaders to strategize and negotiate with the two candidates who will win the 2023 general election to end the problem facing the South East region.

The economics professor argued that the negotiation was necessary to bring lasting peace to the region, as well as the release of the arrested Indigenous leader of Biafra, Nnamdi Kanu; Economic transformation and restructuring in the Southeast, among others.

He stated, ”To begin with, Ohanaeze should study the report of my committee (planning and strategy) in 2019. It may still be relevant today. Secondly, Ndigbo should seriously consider the MoU signed at the Yar’Adua Center in 2010. The leader of the Igbo Political Association, Chief Simon Okeke and our members are still there.

“Thirdly, and for me, the Ndigbo should strategize and negotiate with the two presidential aspirants especially on at least four major issues: lasting peace and security in the South East, including release and engagement with Nnamdi Kanu.

“The economic transformation agenda of the Southeast and the FGN’s Marshall Plan for the Southeast as promised since the end of the Civil War (post-war ‘reconstruction’). We appreciate the Second Niger Bridge and MTN’s latest contract for the reconstruction of the Onitsha-Enugu Expressway.

”But rail lines to five state capitals, quick access to the sea, highways linking the South-East to the North and South-South, our existential threat as the erosion capital of Africa, Free Trade and Export Processing Zones, etc.

“The Restructuring Agenda for Nigeria that devolves powers/resources to sub-national institutions and where the president comes from should no longer matter.

“To liberate the private sector and equalize the full participation of Ndigbo in the economic sphere and governance, etc.”

Soludo wishes Obi the best of luck, but warns against mob action on social media, saying “a mob action often reflects the character of its leader.”

”No one has a monopoly on social media violence, and no one should play God. Life will not end in February/March 2023,” he concluded.

Responding to Soludo’s article, the spokesperson of the Labor Party Presidential Campaign Council, Yunusa Tanko, accused the opposition of using it to thwart Obi’s presidential bid.

He said: “He feels strongly that he is larger than life and if it’s not him, it shouldn’t be anyone. But God has chosen Obi and there’s nothing he can do about it. He should go lick his wounds.

“It still remains that Obi is on the ballot. He has no ability to determine whether Obi will win or not. As we are seeing, Obi is getting a huge victory.’

On whether Soludo has an ax to grind for Obi ahead of the 2023 elections, Tanko dismissed the thought, saying the aim was to remove the growing profile of the LP in the region.

“Soludo is allowing himself to be used. This is an orchestrated attempt to undermine our base from Anambra to other states in the South East. That was the strategy.

“I don’t know why he is trying to risk everything he has for this particular negative cause. But we will rely on the love Obi’s people would show to defeat us in the campaign there,” he said.

Victor Oye, the national chairman of the All Progressives Grand Alliance, declined to comment, saying he did not want to be involved in the matter.