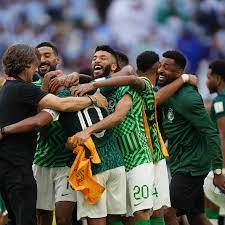 The Saudi Gazzette made the announcement on Twitter on Tuesday evening.

Although Argentina had the chance to win, and arguably had the best player in the world at the moment, seven-time Ballon d’Or winner Lionel Messi, they struggled to hang on as they dropped all three points to a resilient side. Saudi Arabia

In the tweet, “King Salman promises that tomorrow, Wednesday, will be a holiday for all public and private sector workers as well as students at all levels of education to celebrate #SaudiArabia’s stunning victory over Argentina in the #WorldCup 2022.”

PUNCH earlier reported that Saudi Arabia turned the game around immediately after the restart of the second half with Saleh Alshehri’s goal, 48′, equalizing with Argentina and Saleh Aldawsari’s winner in the 53rd minute.

Saudi Arabia has now played 17 matches in FIFA World Cups, losing 11 and drawing two. Saudi Arabia have only made it beyond the group stage once in the 1994 World Cup