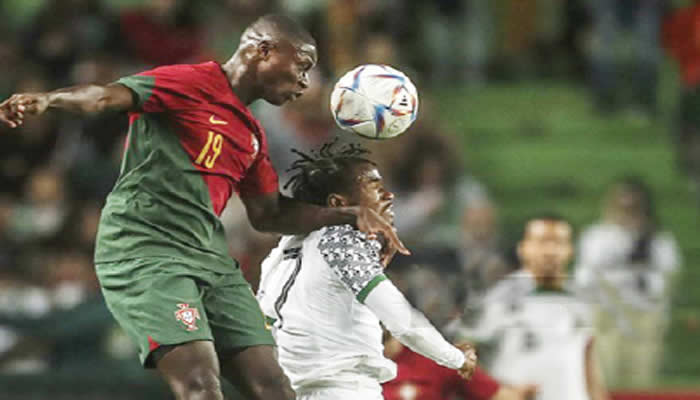 Super Eagles They were unable to break 13 friendlies without a win as Jose Peseiro’s side fell 4-0 to Euro 2016 champions Portugal in front of 50,000 people at Lisbon’s Jose Alvalade Stadium on Thursday night.

The European giants scored the first goal in the 9th minute through Bruno Fernandes and the midfielder scored the second from the penalty spot in the 35th minute.

Nigeria’s last friendly win came in March 2019 as they saw off seven-time AFCON champions Egypt 1-0 at the Stephen Keshi Stadium thanks to a first-time strike from Genk striker Paul Onuachu.

The defeat means the 62-year-old Portuguese tactician is without a win in four games for Nigeria.

On Thursday, Peseiro adopted a 4-4-2 formation with Calvin Bassey playing at left back, Bright Osayi-Samuel at right back and Kevin Akpoguma and William Troost-Ekong paired in central defence.

The Portuguese dominated the game in the first minutes of the first half and came close to opening the scoring.

However, in the 9th minute they got the score through Bruno Fernandes, thanks to an excellent assist from Diogo Dalot.

Despite the absence of Cristiano Ronaldo, the Portuguese midfield led by Bernardo Silva, William Carvalho, Otavio and Bruno Fernandes controlled the game for most of the first half.

The European champions scored a penalty in the 35th minute and Manchester United’s midfield maestro sent Nigeria goalkeeper Uzoho the other way to double the Selecao’s lead.

The Eagles were close to scoring but Ariba’s shot was deflected by Dias for a corner.

At the start of the second half, Peseiro introduced Samuel Chukwueze and Frank Onyeka in place of Ademola Lookman and Wilfred Ndidi, and the team was much improved.

Chukwueze came close to scoring Nigeria’s first goal in the 70th minute after making a brilliant escape from the wings but could not beat the keeper.

After an improved performance in the second half, Nigeria had a chance to reduce the deficit after Osayi-Samuel was brought down in the penalty area, but Emmanuel Dennis missed from the spot as his shot was saved by Rui Patricio.

The Eagles were made to pay for their missed opportunity and conceded two goals in two minutes as substitutes Ramos and Ramio scored to add to Nigeria’s friendly misery.

This result means that Nigeria have yet to win in their last 14 friendlies.