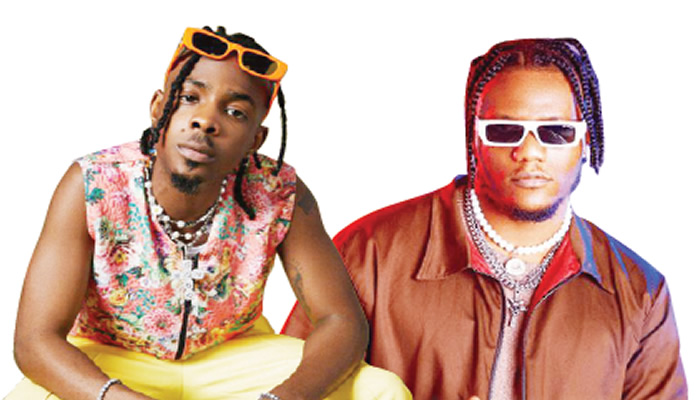 There is no doubt that the entertainment industry is full of talented people. This is evidenced by the fact that Nigerian afrobeats music enjoys a global presence. In the music space, there are people who are gifted in music production and singing. Saturday Beats took a look at two of them who have hit songs today

For those familiar with the music industry, the phrase ‘Pheelz, the Mr Producer’ has long been associated with popular rapper and singer Olamide aka Baddo. Although Olamide has worked and still works with other producers, Phillip Moses aka Pheelz has a production credit on the former’s songs.

Songs he produced for Olamide include ‘Durosoke’, ‘First of All’, ‘Eleda Mi’, ‘Anifowose’, ‘Yemi My Lover’ and ‘Turn Up’. He has also produced songs for other artists such as Tiwa Savage, Teni, Mr Eazi, Fireboy DML, Runtown, Seyi Shay and Phyno.

However, recently, Pheelz has re-introduced himself to audiences around the world as a singer. And, it’s not bad. His hit songs include ‘Finese’ (with Bnxn) and ‘Electricity’ (with Davido). The former was one of the biggest songs of 2021, while the latter is one of the “hottest” songs out now.

Born Phillip Moses in the Ojo area of ​​Lagos State, Pheelze began his musical career at the age of 10 as a church singer.

He once worked with respected producer ID Cabasa and in 2013, he was featured in NotJustO’s ’10 Hottest Producers in Nigeria’ list. He has also been nominated as ‘Producer of the Year’ by many award platforms such as Headies and Nigeria Entertainment Awards.

Signed to Empire Distribution, Pheelz released an Extended Play album titled “Hear Me Out” in 2021, which was well received by fans.

Like Pheelz, John Udomboso aka Young John is another producer who has worked extensively with Olamide. He produced some of Olamide’s hit songs including ‘Story for the Gods’, ‘Confam Ni’ (with Wizkid) and ‘Bobo’.

He has also produced songs for artists such as Kizz Daniel, Flavor, Lil Kesh and Davido.

In 2015, he was nominated in the “Producer of the Year” categories at the Nigeria Entertainment Awards and The Headies.

In March 2022, he signed a deal with Chocolate City, and soon followed it up with a hit song called ‘Dada’. Another song of his, ‘XtraCool’, is one of the most popular songs of the moment.

Young Jonn started playing musical instruments at an early age. Together with his brothers he later created a group called ‘AVG’. In 2012, he signed with Hit Factory Studio as a producer.

So far, he has released two Extended Play albums, ‘Love is not Enough’ (Volume 1 and 2).