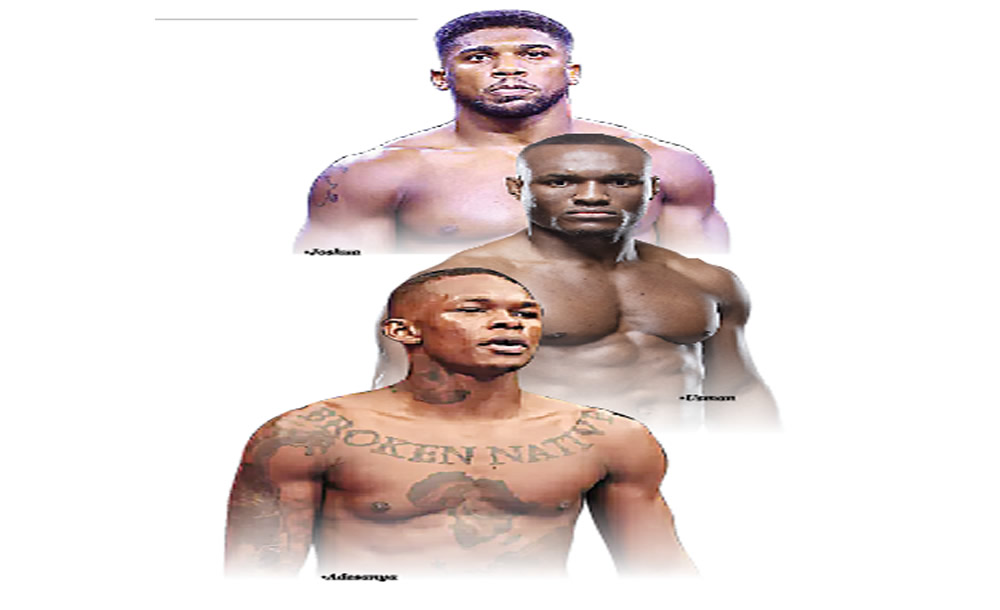 For years, the trio of Anthony Joshua, Kamaru Usman and Israel Adesanya have dominated combat sports. However, 2022 has been disastrous for the fighters, marking the first year since 2016 that none of them will end the year with a belt.

Joshua was the first of the three to begin a six-year dominance by winning his first world heavyweight title against then-IBF champion Charles Martin at London’s 02 Arena on April 9, 2016.

From the opening bell, Joshua had Martin on the back foot and was finding success with his right hand. Then, in the second round, Joshua landed and dropped his opponent in the opening 60 seconds.

Martin almost managed to answer the referee’s count, but was immediately returned to the canvas after an explosive right hand from Joshua ended the fight and saw Joshua fulfill his destiny and collect his first world title.

The Olympic gold medalist would go on to beat Wladimir Klitschko in a knockout for the WBA title in 2017, before continuing on his way to adding the WBO belt to his collection in March 2018 after defeating Joseph Parker by unanimous decision.

The next year after this, 2019, would see Joshua Usman and Adesanya join forces and usher in an era of Nigerian supremacy in combat sports.

At UFC 235 in March 2019 at the T-Mobile Arena in Nevada, Usman would be crowned UFC Welterweight King, becoming the first African fighter to win the UFC title. Usman delivered the performance of his career to defeat reigning American welterweight champion Tyron Woodley.

After the fight, he started the press conference by greeting reporters in Arabic before switching to Pidgin.

“To Nigeria, I told them, we would do it, I told them we never fail. And we did it today,” he said in Pidgin.

And proving Usman’s words that he never fails, it was Adesanya’s turn as the undefeated interim champion a few months later at UFC 243 in October 2019, when he took on reigning champion Robert Whittaker.

‘The Last Stylebender’ delivered a masterclass against Whittaker and became the undisputed champion by knocking out the Australian-New Zealander. Before the fight, the Nigerian was criticized for not having knockout power.

After the fight, “He threw away everything we expected. We planned everything from Plan A to Plan Z. It’s unreal. They said I don’t have the power of elimination.”

Four months before Adesanya’s success, however, Joshua lost the belt to American Andy Ruiz, who stunned Joshua by knocking him out in the seventh round at Madison Square Garden in June.

However, it would be the first year for all the Nigerian champions as Joshu won his rematch bid and ended the year on a perfect note by winning the belts from Ruiz in December of the same year.

It is not until 2022 that Usman faces a title defense against a foe he defeated earlier in his career after being sidelined from the Octagon in 2021 due to an injury.

On the same night as Usman’s fight, just hours before the “Nigerian nightmare” Brit Leon Edwards steps into the Octagon, Joshua will attempt to regain the IBF, WBA and WBO titles he lost to Ukrainian Oleksandr Usy in September 2021.

Joshua pushed Usy all the way and put in a more impressive performance than in their first fight at the Tottenham Hotspur Stadium last year, but could not get past the Ukrainian pair, who fired back to control the closing stages to secure a split decision victory. .

Hours after the Joshua defeat, more disappointment came for the Nigerian as Usman lost to Edwards in the main event of UFC 278 at the Vivint Smart Home Arena in Salt Lake City, USA.

The welterweight champion was making the sixth defense of his title when he clashed with Edwards in 2015. The fight seemed headed for the same conclusion as Usman overcame a tricky start to stamp his authority in the main event.

Edwards landed a vicious kick that sent the ‘Nigerian Nightmare’ to the canvas with just seconds left in the five-fight clash that handed Usman his first loss in 15 straight fights and the second of his entire career.

And most recently at UFC 281 on Nov. 13 at Madison Square Garden, Adesanya lost his middleweight belt to former kickboxing rival Alex Pereira to make it three defeats at the hands of the Brazilian.

Adesanya entered the fight with an excellent record in the UFC middleweight division, looking for revenge against Pereira, who defeated him twice in kickboxing in 2016 and 2017.

The 33-year-old dominated the fight until the fifth round, when Pereira knocked him out with a combination of punches.

The Last Stylebender has now lost his first middleweight fight in MMA since becoming champion after five successful title defenses.

There will be no title shot this year for the trio after Joshua broke up with Tyson Fury in October for a shot at the WBC belt.

Usman and Adesanya, however, do not expect to be without their belts for long. Usman could get a rematch against Edwards next year in England and Adesanya will see his old foe for the fourth time next year as well.

Efe Ajagba also lost his chance to become champion at the T-Mobile Arena in Las Vegas last year to Frank Sanchez, and this year he has just started his comeback. However, Ajagba began his comeback from his first loss and subsequent surgery in impressive fashion on August 27, stopping Jozsef Darmos in the second round of the eight-round bout at the Hard Rock Hotel & Casino in Tulsa, Oklahoma.