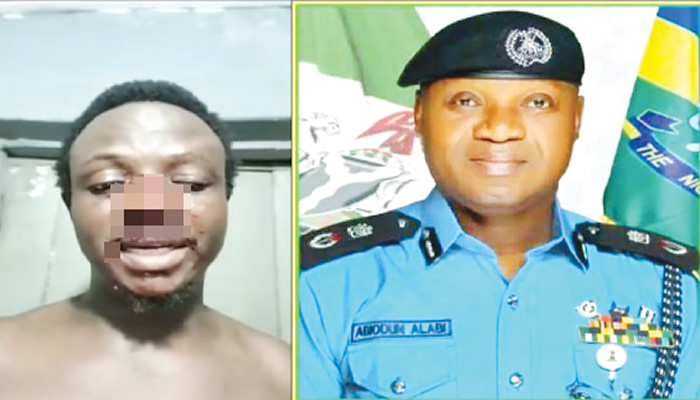 A yet to be identified man has recounted his ordeal in the hands of suspected kidnappers who abducted him and other passengers in Lekki area of ​​Lagos State.

The victim, in a viral video on Thursday, said he boarded a commercial bus to Iyana-Oworo area of ​​the state, but on the journey, he discovered that he fell into the hands of suspected kidnappers.

he said, “I boarded a bus going to Iyana Oworo and noticed this strange smell. Anyone who has been in military training will know about the gasses that knock people out. I knew that was it, so I spit into my handkerchief and used it to cover my nose.

“In about five to 10 minutes, all the other passengers on the bus fell asleep except the group members, who used nose masks to cover their noses.”

“So we started exchanging words. I wasn’t rude or anything, begging them to have my phone, a Samsung Galaxy S22 that costs N1.3m and can still be sold for N800,000.”

The victim said he also offered them his ATM card to empty his account and also a gold necklace, but they refused to get off the bus until he was killed and his body dismembered.

he said, “The bus was then parked in a dark lane under the Adeniji Bridge before I got out. They started using cuts, knives and different weapons on me. I am an African man and I am fortified. When they realized that the knives, daggers and sticks did not cut my body, around three of them held my neck and two others took their hands behind my back and put a knife to my neck to kill me but it was not penetrating. “

The man said when the attempt to kill him failed, the leader of the suspects, who spoke in the Hausa language, ordered the three men in army uniform to start using boots to hit his head as he lay on the ground.

In the video, the victim, whose face was swollen and could be seen coughing up blood as he said he was bleeding internally, said he almost lost consciousness during the attack.

he said, “So I reached for my bag on the floor, grabbed a knife from inside the bag and started swinging it recklessly. In the process, he cut one of them in the stomach, one in the neck and one in the eye. A lot of bleeding started.

“Their leader told them that they got the rest of them who were sleeping and that they should spare me and let me die at the end of the day because of what they did to me. All the people I just talked to were from the north. These people have also entered Lagos State.” he added.

The Public Relations Officer of the State Police, Benjamin Hundeyin, in reaction to the video, tweeted that a thorough investigation had begun into the matter.

He said: “The Lagos State Police Command is not aware of the video circulating about the presence of some criminals in the Lekki area of ​​Lagos. A thorough investigation has commenced.

“The command will leave no stone unturned to ensure the safety and security of all residents and visitors to Lagos State. To achieve this, all human, material and operational resources have been adequately and optimally deployed.”