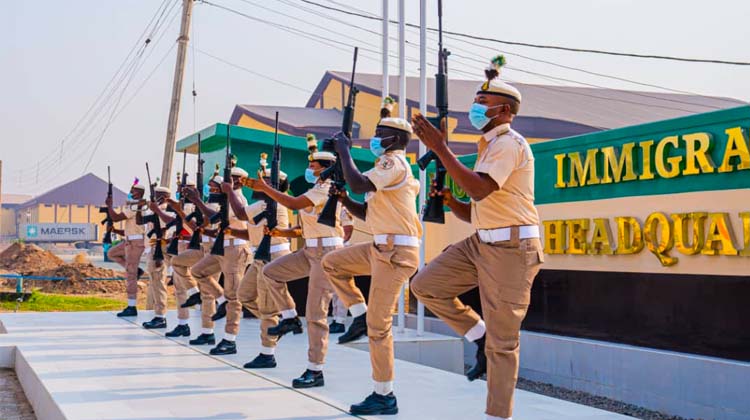 The Jigawa State Command of the Nigerian Immigration Service has rescued eight victims of human trafficking who were apprehended along the Kaya – Daurawa – Roni link road in the state.

The NIS State Comptroller Ahmad Bagari disclosed this at a news conference in Dutse on Tuesday.

The eight victims included five males and three females who hailed from Abia, Edo, Imo and Ogun states while the driver hailed from Achilafiya town in Yankwashi LGA of Jigawa.

The victim reported that they were rescued on Sunday, November 20, 2022, around 7:00 p.m., on their way to Niger Republic, on their way to Libya, together with a driver and a vehicle with registration number (Saloon Golf); YEN-07 CE Bayelsa).

He explained that the victims ranged in age from 19 to 45 years, noting that only one of them had an expired Nigerian passport.

He also explained that the victims mostly traveled without an agent because all transactions were done over the phone within the syndicate.

“Primarily, they are influenced by friends and the knowledge of parents/guardians,” he said.

Accountant Bagari further said that no substance/drugs were found in their possession during the enquiry.

He disclosed that the Comptroller General of the Service, Idris Jere, ordered the victims to be handed over to NAPTIP and advised parents and guardians not to send their children/guardians abroad for greener pastures.

He emphasized that Nigeria was far better than the so-called greener attitude abroad in terms of freedom and other expectations.

“It is important to advise parents/guardians and the general public to take care of their children/wards and inculcate patriotism to stay in their home country and build to greater heights.

“This greener attitude that is absent abroad takes away their freedom and exposes them to slavery, forced labor, organ harvesting and death in the desert and at sea on their way to their destination.

“Therefore, citizens are advised to exercise their civic responsibility by reporting cases of human trafficking and other related criminal acts to the nearest security agencies,” the Comptroller said.