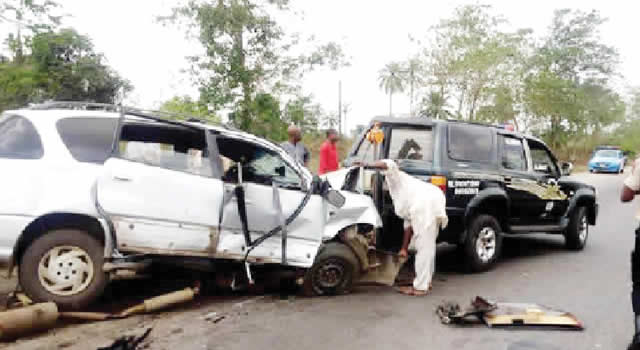 Four people lost their lives on Thursday on the Abeokuta-Sagamu expressway when a Toyota Sienna bus collided with a Sino truck from behind.

The spokesman of the Ogun Traffic Compliance and Enforcement Corps, Mr. Babatunde Akinbiyi, confirmed the incident to newsmen in Abeokuta, the Ogun State capital, on Friday.

Akinbiyi explained that the accident happened at 19:18 in Adedero, in front of Adaranijo Hornitegi, along the route, saying that the vehicles were going towards Abeokuta.

“I learned that the Toyota Sienna marked AAA 307 GN was entering Abeokuta, and the driver was chasing the truck, which belongs to a cement manufacturer, he collided with the truck from behind due to speed.

“The driver could not verify that there was a vehicle in front of him, along with the smoke coming from the truck, marked WDL 418 XA, it also had no tail lights,” he said.

He said all the victims were male.

The TRACE spokesperson stated that the deceased was admitted to the Ijaye State Hospital mortuary in Abeokuta.

He commiserated with the family members of the victims and cautioned drivers to avoid excessive speeding, adding that even articulated vehicles must ensure that their vehicles are maintained regularly.