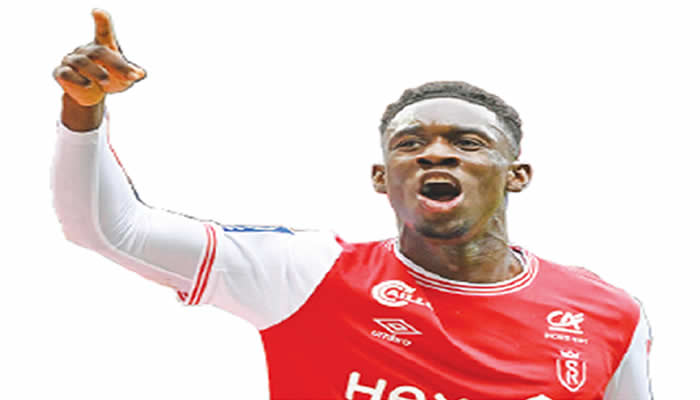 On-loan Arsenal striker Folarin Balogun has revealed he will make a decision on his international future very soon after an impressive season with Reims in the French Ligue so far this season. PUNCH Sports supplement the reports

After failing to make much of an impact on loan at Middlesbrough in the second half of last season, Arsenal secured Balogun on another loan move to Ligue 1 and the move seemed perfect for the player who has regained his goalscoring ability.

That said, Balogun has found the net eight times in 14 La Liga appearances and has also registered two assists, one more than Lionel Messi (7) and four less than Kylian Mbappe (12), who currently tops France’s goalscoring charts.

His performances have not gone unnoticed, with Arsenal legend Thierry Henry saying the youngster’s decision to move to France is paying off.

Balogun’s performances have not gone unnoticed and have attracted plenty of attention as he looks to develop into arguably the most important season of his career, and the 21-year-old is keeping his options wide open.

Although he currently represents England at Under-21 level, Balogun has played for the US Under-18s. The New York City-born forward, who has family roots for the USMNT and Nigeria, confirmed in an interview with ligue1.com that he would decide his future soon.

“Yes, when I was 17 years old, the US federation offered me a friendly tournament in the summer in the Czech Republic,” said Balogun when asked about his young career so far.

“A few months ago I played in England in the Euro 2017, but after talking to my family I decided to go. And we won the tournament! It was a good experience because I saw a different way of playing and other methods. I’m still in touch with many of the people I met there.’

On reports swirling in the media about his future, the Arsenal man said: “I have no problem. It is the role of the media to ask such questions and I accept it. I will make a decision soon and that decision will not depend on what the media or people think, for me but it depends on what is best. We will talk about it calmly with my family.”

He added: “My parents are Nigerian, so their first language is Yoruba. I have a lot of family in Nigeria. My mother also has family in New York and Atlanta, with whom we exchange regularly and sometimes they visit us in London. And London is my city, I grew up there , where my friends are, and if people ask me where I’m from, I say I’m English. But yes, I’m a mix of all those cultures.”

“Yes, Leon Balogun! We are not related but I have played against him before! It was in a pre-season friendly between Arsenal and Rangers just over a year ago,” he said.

“By the way, we both had the number 26, so Balogun had two number 26 shirts on the field [laughs]. After the game, we had a little chat together. I think he’s playing for Queens Park Rangers this season.’